Chasing the Sun at Port Macquarie – Sunrise and Sunset photos

This journal entry highlights ‘Day 5 of 6’ of my road-trip with my good friend up the east coast of NSW back in 2012. We never been to Port Macquarie so it was a great opportunity to enjoy the sights. We stayed at T’s Tennis Resorts which was a big motel with great sporting facilities and known for their tennis courts, where many local tournaments are held. But they also have swimming pools, a spa and newly installed putt-putt /miniature golf circuit. Overall, it was a very comfortable place to stay over the duration of 2 days. We cooked on the barbeque and prepared our own meals to save money and eat better.

We didn’t get much sleep that night we were both very dazed when we woke up at 4AM to drive to Town Beach, Tim had even less sleep, apparently I was snoring and sleep-talking all night! –sorry mate!

The night sky was a dark blue shade that faded into a light blue horizon, with the colourful wispy clouds ablaze with yellow and orange were it catches the first light of the sun, then fading off to a pink and purple. The beach was also reflecting these beautiful colours along the shore and in the sand.

Standing there in awe of such a sight, I couldn’t wait to scout the beach for angles, this happened to be my 3rd photo of the morning when we were walking along the beach to a section with giant rock platforms. It was already my favourite image for the day.

We got to the rock platforms and the sun was shining through the gaps of the heavy clouds above the horizon creating an orange and golden sky. The waves there were turbulent and smashing up againt thes rocks. You can see the rocks being formed by the water over millions of years.

Shortly after we packed and went back to the resort to upload and review the images and eat a nice warm breaky. A late morning snooze was needed after that morning session so we could continue shooting latet and shoot the sunset at another location in Port Macquarie.

We arrived at a different location moments before sunset, only to find that it was a disappointing view, so then we were frantically chasing the sun, driving west, in-land from the east coast of Port Macquarie, past the town, and into the flat farmland where we could pull over on the side of the road to capture this beautiful Australian sunset. As you can see, by the time we found an ideal location, the sun had set behind some mountains off to the distance, but this had cast a huge shadow in the sky. The spectrum of colours in the sky and the brooding cloud formation made an interesting kind of sunset photo to share.

Where is Port Macquarie?

Today in Sydney the weather is absolutely dreadful, I had some time off from work, and was inspired to finish editing these pics I took over a year ago in Newcastle during a landscape photography road-trip half way up the east coast of Australia with my friend and fellow photographer Timothy Yip.

2012 Road-trip up the NSW coastline

This was one the most challenging environments I’ve shot in, and it was a choice we made to endure these conditions and see how much we (and our cameras) could physically take. Plus we didn’t really have a choice since we were only there for a couple days and had to make to the most of this trip! 🙂

So it was Boxing Day, 26th of December, 2012, 4:30 AM (2nd day of our NSW east-coast road trip), cold, dark, very windy with some light rain when we got to Newcastle Ocean Baths (right on the beach). There was zero chance of a majestic sunrise happening, and the conditions weren’t ideal for us or the cameras. Strong winds blew seawater and rain onto the lens and into the buttons of the cameras so we were frequently wiping the lenses dry only for it to get a few more drops the instant you take a shot. This limited our compositions too, we weren’t able to get out to the rocks facing the ocean because the waves were crashing violently and spraying up too much sea water which meant we couldn’t get down low to the water with the cameras and tripods for those awesome low wide-angle shots. So with our large hot cups of McDonald’s coffee and cameras in our hands, we braved the weather and began scouting the area to find some other interesting scenes to shoot.

We felt like we were National Geographic photographers risking our lives for awesome photos. The morning was long, we walked (marched) in the rain for hours, but towards the end of our journey, we ended up getting soaked by a few massive waves hitting a break-wall and then we had to call an end to it. We were freezing cold by this point, and had a long walk back to the car…

So far, my favourite two shots for the day (and the ones I’ll publish for printing or licensing) are taken at Flat Rock beach, Newcastle (shown below). This location is popular for surfing and there are annual tournaments held here. Newcastle in general has a huge surfing culture and waves are good year-round.

I liked the movement in the water and the clouds, even though the exposures where only for 5 seconds, you can see quite a bit of cloud movement, an indication of just how windy it was that day. I decided black and white also for these photos because they looked more dramatic and have this fine art quality about them.

Life in the fast lane

This image conveys the rapid urban development, emerging middle-class (with more income and prosperity), and the Americanization of the Chinese culture.

This particular street, named Wangfujing, meaning “Prince’s Mansion well” (after a sweet tasting water well was unearthed during the construction of ten aristocratic estates and a prince’s residence in the Qing Dynsasty- 1644 to 1912), is Beijing’s most famous shopping street that is located in a downtown district of Dongchen, dating back to the mid-Ming Dynasty (1368–1644) the markets, commerce and other consumer activities have been conducted in this area for centuries. It is only about one block long but consists of many large and small stores, consisting of Beijing’s most prominent brands (around 280) and many international brands.

There is also a section that is dedicated to food and snacks, with many street stalls and restaurants crammed together serving common and exotic street food such as fried scorpion, meat kebabs, desserts and candied fruits on a stick.

In the past this street was known to English-speaking foreigners as Morrison Street (named after the Australian journalist George Ernest Morrison – another interesting story).

It used to be a street for vehicles to travel through, but since 1999, much of it has been pedestrianized.  The hustle and bustle never seems to stop here, open and busy during the day but much more alive during the night with the bright lights and more locals and tourists out to eat and shop.

Captured using the Canon 50D with a Sigma 30mm F1.4 lens, mounted on a Benro carbon-fiber tripod and remotely triggered to capture four separate long exposures to create one seamless photo using Photoshop. Not much post-editing was required, as I like the way my Canon camera renders colorful night scenes, so I just boosted the sharpness and contrast a little.

Would have been easier to do this with a landscape lens but my Tokina 11-16mm broke before my trip to Asia and was under repair. So for all the landscape shots requiring a wider perspective, I had to make-do with the Sigma 30mm (which has a 50mm perspective) during 90% of my Asia trip, shooting multiple images to stitch up later on the computer. A very time-consuming task!

I’m glad that my images turned out OK, considering the difficulties. I certainly learned a lot about composition with a prime 50mm lens and also improved my understanding of making panoramic images.

The southern side of Hong Kong, just one half of the alluring “Pearl of the Orient”, a British/Chinese mega-metropolis that covers a very little portion of China’s vast landmass. It is one of the world’s leading international financial centers, this business district, where the international exchange of currency is the main contributor to its economy along with its reception of foreign direct investment.

Check out this beautiful side of Hong Kong, a modern jewel (click image below to enlarge). Captured on an almost clear summer night, walking along the famous ‘Avenue of the Stars’ in Kowloon. It is a panoramic image composed of 10 30 second landscape (horizontally orientated) images stitched together and edited in Photoshop and Lightroom with my signature style. The equipment used was my newly purchased Canon 16-35mm F2.8L mounted on my Canon 50D with a corded remote shutter trigger, with the whole kit mounted on a tripod of course!

Buy your copy of this Hong Kong panoramic today in 12×36 inch for AUD$150, and get free matte and framing. Offer last until 28th of February.

Another place I call home, so many of Sydney’s landmarks can be seen from here including (from left to right) St. Mary’s Cathedral, Centrepoint tower, Fort Denison, QVB, Sydney Opera House, Anzac Bridge, The Rocks and Sydney Harbour Bridge.

Xizha Watertown – Venice of the East

A picturesque ancient water town in Wuzhen that has more than 1300 years of history, built south of the Yangtze River, these canals divide the town into 6 districts.

A town rich in culture that can be seen to this day, with unique food and various folk festivals, it is also the home of Chinese literature, many famous poets and calligraphers moved here to pursue their dreams.

Hong Kong – The Top of The Peak 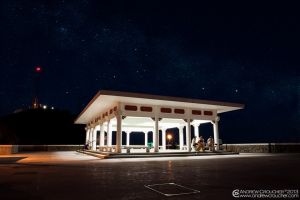 Top of The Peak!

It was a 3km hike from the tourist area of The Peak to get to this location where the telecommunication towers of HK are. The elevation is about 554m above sea level, but not the highest point of HK, to which Tai Mo Shan holds that title. Here can be seen views of Lamma Island, Central, Victoria Harbour and the surrounding islands.

The air was so fresh up here! People here were enjoying the sights, hiking, chilling out and doing tai chi and taking pictures. I was thankful the sky was so clear after a typhoon blew all the smog and clouds away for my photographic expedition.

I took this shot from The Bund, over looking the Hangpu River onto the stunning Pudong district skyline.
It’s not often we get a clear day in Shanghai! Pudong is usually covered in smog and fog.

It was summer holidays and the city was packed with mainland Chinese tourists, all wanting to get shots of this magnificent view.